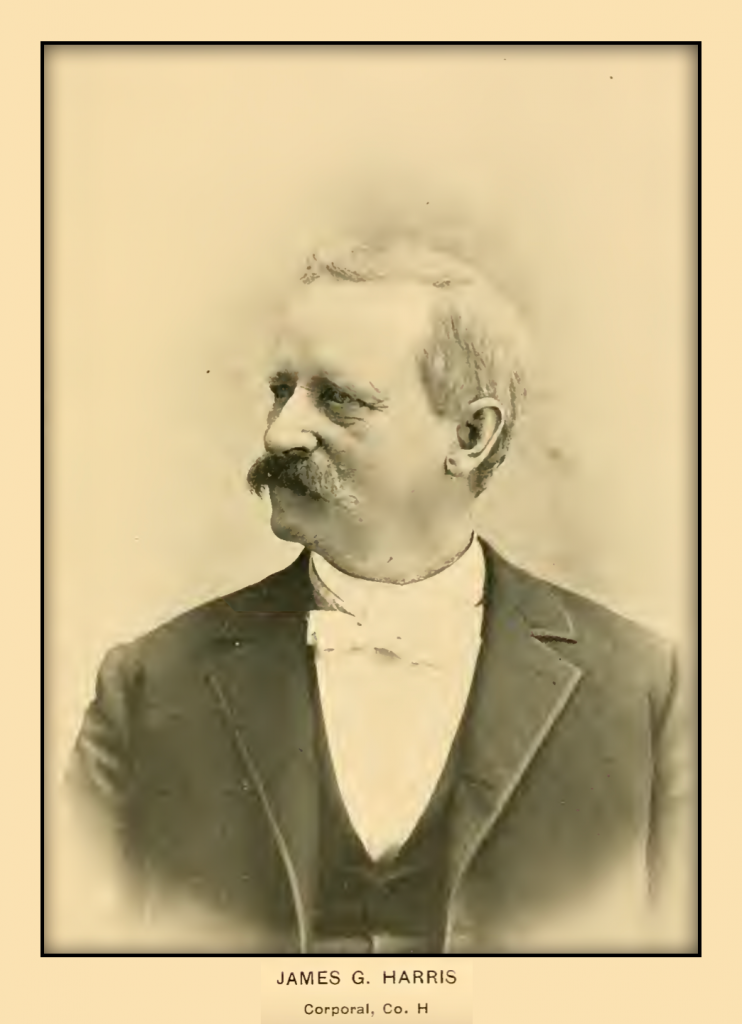 DECEMBER 30 we broke camp, leaving our pleasant quarters near Winchester, and after a cold march of three days, reached Lovettsville, in the Loudon valley, Jan. 1, 1865. This place is located a few miles southeast of Harper’s Ferry, and on the south side of the Potomac. Here we again constructed winter quarters, occupying there until February 24, at which time we joined the bal­ ance of the division preparatory to starting on Sheridan’s last great raid.

Nothing of an unusual character transpired during our fifty-two days’ sojourn here. Of course, we had our share of rough-weather picket and scouting duties to perform. During this interval, quite a number from the regiment visited the home on furloughs, and part of the time our camp was made lively by the influx of Northern ladies visiting husbands, sons, and friends. Many pleasant social gath­erings were held in the officers’ tents.

Those religiously inclined will recall the interesting religious services held at the church in the village, in which Rev. A. J. Blanchard, now chaplain of our Regi­mental Association, bore a conspicuous part. After years the writer heard many expressions of gratitude from those who benefited through the labors of this devoted man at that time.

During the latter part of January, Hon. Henry S. Foote, ex-senator from Mississippi, after making his way through the Confederate lines, came to an outpost of the Dragoons and gave himself up. While awaiting permis­sion to visit Washington, he was the guest of the regi­ment. Surgeon Kneeland had many conversations with the distinguished visitor relative to public affairs. Mr. Foote expressed fears that the assassination of Lincoln would be attempted by misguided Southern zealots. How sadly were his forebodings realized!

General Grant had planned an early campaign, the quietude of our pleasant camp life was rudely disturbed by orders which started us out upon –

which resulted not only in clearing the Shenandoah Valley of the last remnant of organized Confederates, but ­inflicted great injury upon the Confederacy elsewhere.

On the morning of Feb. 24, 1865, we very reluctantly left our comfortable winter homes at Lovettsville and joined the great raiding column concentrating at Win­chester. Our force was composed of Custer’s and Devin’s divisions of cavalry and two sections of artillery, all told about ten thousand officers and men.

General Devin having been placed in command of the First Division, Col. Charles L. Fitzhugh was assigned to the Second Brigade, while Major Smith commanded the Dragoons. On account of inefficiency, Torbert was discarded, and General Merritt was appointed ·chief of cavalry.1

On the 27th, we started up the valley pike toward Stanton, camping the first night near Woodstock, where our band favored the inhabitants with the last good Yankee music they were to hear. March 2 we reached Stanton and turning eastward encamped near Waynesboro, where Ouster’s division had just captured the rem­nant of Early’s army, consisting of sixteen hundred offi­cers and men. These were sent back under guard to Winchester.

(Footnote from Bowen) ‘Much of this chapter Is from an article by Capt. A. J. Leach. Oontrl­ buttons by 8. 8. Morris and others have also been drawn upon.

Crossing the Blue Ridge at Rockfish Gap we pushed on to Charlottesville, with not much incident except rain, mud, and march. Owing to the incessant rains and spring thaws the roads were rendered almost impassable and were distressingly wearing on the poor horses as well as the men. In numerous instances, the strain on the horses’ hoofs was so severe that they were torn off when coming in contact with the. sticky clay and quicksand, necessitating the shooting of the animals. In such instances, the troopers were obliged to follow the column as best they could until another mount could be obtained by confiscation.

While resting at Charlottesville many of the regiment visited Monticello, the old home of Thomas Jefferson; also that famous institution of learning which be founded, the University of Virginia.

We were now free from the opposition, in a rich portion of Virginia heretofore almost unvisited by Union troops, and containing abundant sustenance for the men and horses. Sheridan was thus enabled to send out detach­ments unmolested in all directions to destroy railroads, warehouses, canals, and whatever would cripple the Confederacy.

Leaving Charlottesville on the 5th we struck the James River canal at Scottsville, then proceeded to Howards­ville. The next morning at two o’clock we started out to capture the bridge over the James at Hardwicksville, twelve miles up the river. I was ordered with my squad­ r n, companies K and B, to take the advance, and at first sight of the bridge to send back word, then charge with all speed possible. This we did at daybreak, bot dis­ covered huge volumes of smoke issuing from the other end. For some days the structure had been saturated with tar and turpentine and stuffed with straw, which was fired on our approach. A few shots were fired at us, and we could hear the derisive jeers of those on the other side.

Our inability to save the bridge materially changed Sheridan’s plans, but he expressed his satisfaction that we had made every effort possible to accomplish his pur­ pose. We, however, destroyed valuable rebel supplies.

At New. Market the river feeds the canal through bulkhead locks. These our regiment destroyed, and turned the river into the canal, causing great destruction.

About noon of the 8th “officers’ call” summoned .us to brigade headquarters, whore we were informed that an all-night’s seci·et march was before us. At 3 P. M. we started for Columbia, halted at eight o’clock, and fed the horses, but no fires or coffee for the men. Resuming the dreary march, we kept it up all night, in the furious rain and pitchy darkness, often floundering in the deep wood nearly to the horses’ bodies. We were on hand at day­ light, having marched fifty-six miles in sixteen hours, and a more jaded, water-soaked, and mod-bespattered set of men and horses could not be found.

Much of our night’s march was through forest roads, and at least one-half the men were bareheaded, their caps having been swept off by tho branches or fallen off while the men slept on their horses. In another forced march, we reached Goochland Courthouse, twenty miles farther down the river, playing havoc with locks, dams, boats, and everything of value to the enemy.

Lieutenant Tadder, with twelve men, followed down the canal, capturing horses and destroying boats. They reported to General Sheridan with two hundred colored boys and fifty-five prisoners. For this success, Tadder was awarded a gold medal. After another long march, the regiment rejoined the division on the road to Louisa Courthouse about midnight.

Through all the country north of Richmond and the James, for the next ten days, the cavalry roamed at will, continuing the work of destruction in all directions. Passing to the north of Richmond, Lee sent out cavalry and infantry to entrap us; but Sheridan shrewdly evaded them, and with his entire command safely reached White House Landing on the 18th. Says Sheridan: “The hardships of this march far exceeded those of any pre­vious campaigns by the cavalry. Almost incessant rains had drenched us for sixteen days and nights, and the swollen streams and well-nigh bottomless roads pre­sented grave difficulties on every hand. We should have been forced to abandon most of our wagons had it not been for the help given by the two thousand negroes who attached themselves to our column, and literally lifted the wagons out of the mud.”

After drawing rations at White House we crossed the Peninsula, thence the James River at Deep Bottom, joining the Potomac army near Petersburg on the 27th of March, 1865; and after a rest of fewer than two days started out upon the Appomattox or final campaign, described in the following chapter.