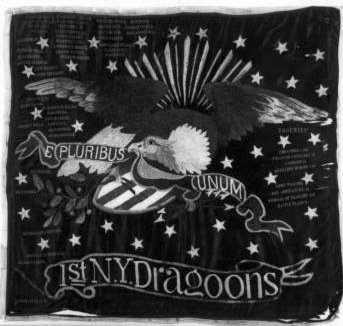 The President submitted a letter from Mrs. Laura Wolcott Gibbs, which was read as fol­lows:

” SIR:- The flag., which Accompanies this was placed at my disposal by the officer & and men of the First New York Dragoons, originally com­manded by my Son, Brevet Major-General Al­fred Gibbs, U. S. Volunteers, and latterly by Col. Thomas J. Thorpe, of Almond, Alleghany Co.

“It bears upon it the record of forty-six bat­tles engagements, in which the regiment lost, killed, and wounded, including the most desperate under Grant, Meade, and Sheridan, in Virginia; and it too carries a record of captures and trophies which few, if any, can surpass.

”Such a memorial belongs not to an individual, but to the public; and though I greatly prize it, both associated with my son’s military career, and from the kindness which induced the gift on the part of his brothers in arms I think that the archives of your Society, the first object of which is to perpetuate the history of New York and her sons, is the most fitting place of deposit.

“May I, therefore, ask that you will assume its custody, subject however to reclamation by my­ self or family, or should it ever again be called into service, by the regiment to which it belonged.

“Accompanying it is the printed history of the regiment a record modest as it is glorious, and the correspondence which took place on the transfer of the flag.

On motion of Mr. J. Romeyn Brodhead, the thanks of the Society were voted to Mrs. Gibbs; and the flag was accepted in accordance with the terms expressed in her letter.

Mr. Moore, the Librarian, reported receipts or donations & since the last meeting.