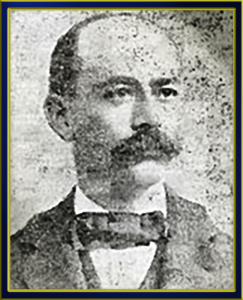 A man of great modesty and a keen sense of humor, he was beloved by his patients and a large circle of friends. Blair, as he was known, never married.

The first school he attended was at Fort Leavenworth, Kansas, where his father served as senior major of the newly formed Seventh U.S. Cavalry (made famous by Custer). Senior Major Alfred Gibbs, age 45, died suddenly on December 26, 1868, forcing the family returned to the east in New Brunswick, New Jersey, where just prior to age 16, he was admitted to Rutgers College graduating, at age 20, in the Class of 1878 with a degree of A.B. (Bachelor of Arts).

He then enrolled at the University of Pennsylvania where he graduated, on March 15, 1881, with a doctorate in medicine. He traveled to Austria where he spent one year of surgical study in Vienna, under the supervision of the eminent surgeon Dr. Theodor Bilroth. Prior to his service in the U.S. Navy, he was an assistant surgeon, at Lebanon Hospital and then assistant surgeon, at Dement Dispensary of New York City. He also practiced surgery in association with Dr. Parker Syms, Manhattan, New York City.

Spain declared war on the United States on April 23, 1898, and the United States passed its own declaration of war retroactive to April 21, 1898. The declaration was to prove fateful for the doctor and country alike. John Blair Gibbs was among the first to volunteer and to be sent to the front, landing at Guantanamo with the advance expedition.

Prior to volunteering for naval service, Dr. Gibbs would comment to his brother Alfred that “I don’t see how with any self-respect I could stay in New York while such a scrap was going on.” Using his familial connection (by marriage), Assistant Secretary of the Navy Theodore Roosevelt encouraged him to offer himself for appointment as a surgeon for a thorough examination and he was completely successful.

On April 25, 1898, at the Navy Yard Hospital, New York City, Dr. Gibbs, a 40-year-old bachelor, was among the first of the candidates to receive the appointment of acting assistant surgeon in the Medical Corps, U. S. Navy.

Acting Assistant Surgeon John Blair Gibbs was assigned to the First Marine Battalion’s Headquarters Staff as the assistant surgeon of the battalion’s medical staff under the command of Surgeon John M. Edgar, Medical Corps, United States Navy.  On his appointment, Surgeon Gibbs was ordered to Key West, Florida, where on May 6, 1898, he reported for duty with the battalion on board U.S.S. PANTHER.

On June 7, 1898, the battalion’s medical staff of the First Marine Battalion (Reinforced), under the command of Lieutenant Colonel Robert W. Huntington reboarded the transport ship U.S.S. PANTHER and sailed for Cuba.

During the afternoon of Friday, June 10, PANTHER anchored at Guantanamo’s outer bay. At 2:00 in the afternoon four of the six Marine companies disembarked and climbed to the top of a 192 foot hill above the landing beach that was soon named Camp McCalla by Colonel Huntington, after his immediate superior, Captain Bowman Hendry McCalla of the U.S.S. MARBLEHEAD, force commander. On the afternoon of the landing, tents were pitched and outposts established. The first night on Cuban soil passed quietly and uneventfully.

On the morning of the next day, Saturday, June, 11, the two remaining companies disembarked. At dusk, Spanish infantry and Cuban loyalist irregulars attacked the perimeter outpost sentinels killing two Marines.

On Sunday, June 12, at 1:00 in the morning, Surgeon Gibbs had almost finished bandaging a wounded private’s hand, while under continuous fire from the enemy, when an attempt was made to take the sick and injured to a place of greater safety. Surgeon Gibbs stood and advanced to the front of the medical tent. While silhouetted by a sodium vapor lamp, he was fatally wounded.  According to the Report of the Commandant, September 1898, Colonel Commandant Charles Heywood explained that “Assistant Surgeon John Blair Gibbs was killed by a Mauser bullet reported by Surgeon John M. Edgar, of the battalion, to have been fired at a range of 600 to 700 yards.” The projectile shot through the left temporal region and exited at the right temporal region. Surgeon John Blair Gibbs died half an hour after receiving the fatal wound. His brief naval service had lasted only forty-nine days.

Reverend Harry W. Jones, serving as chaplain on board the U.S.S. TEXAS, volunteered to go ashore in order to aid and comfort the wounded and bury the dead. Chaplain Jones provided the Committal Service at Camp McCalla at the internment of Surgeon Gibbs and the two Marine privates, McColgan and Dumphy, of Company D, killed on outpost duty the previous afternoon.

Nearly a year later, in March 1899, the remains of the battalion’s casualties were disinterred at Guantanamo Bay and returned to the Navy Yard, New York City aboard the U.S. Army transport ROUMANIAN (later renamed CROOK).

Acting Surgeon John Blair Gibbs’ remains were transferred to the care of his uncle, Dr. Oliver Wolcott Gibbs, at Newport, Rhode Island, and he was reentered on Saturday, April 29, 1899, beside the grave of his father at St. Mary’s Episcopal Church, Portsmouth, Rhode Island. At the request of the family, only a committal service was read at the grave.

In New York, the desire for a fuller expression of sympathy, not only among his friends but by the public, resulted in a memorial service at Trinity Church, the large attendance at which testified to the widespread regret felt at his death. A bronze tablet was erected in his memory in the Chapel at Rutgers College:

The tablet was unveiled on “Founders’ Day” at the College, in the presence of a large assemblage of College men and Naval officers. 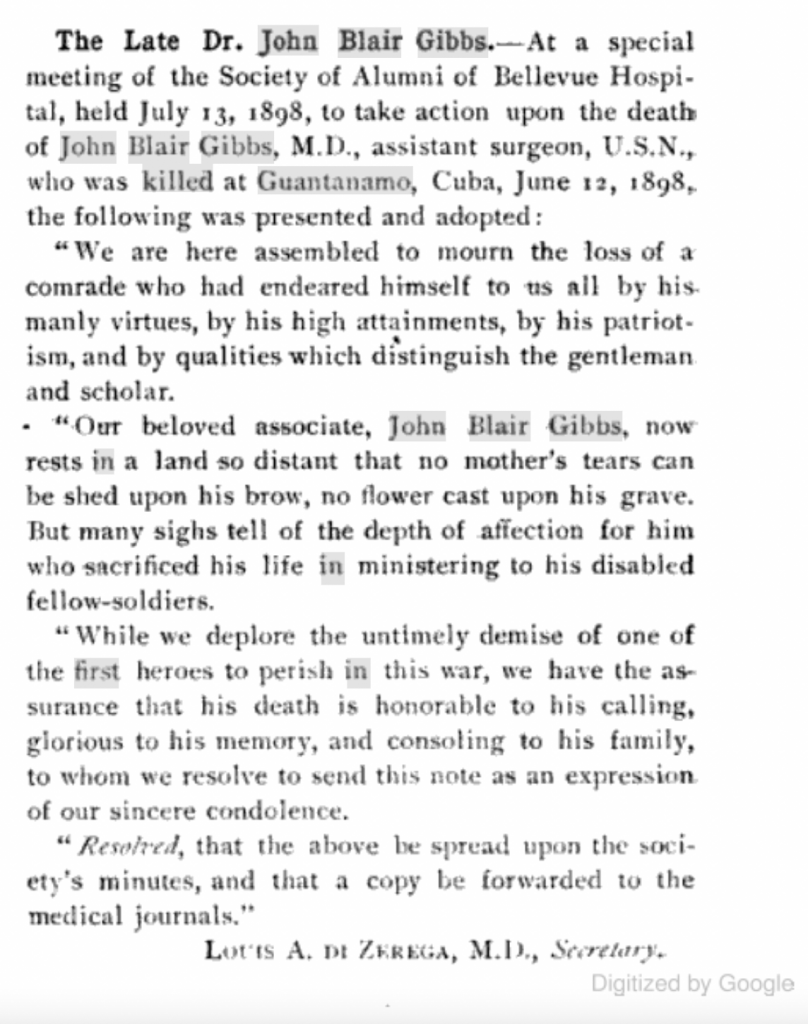