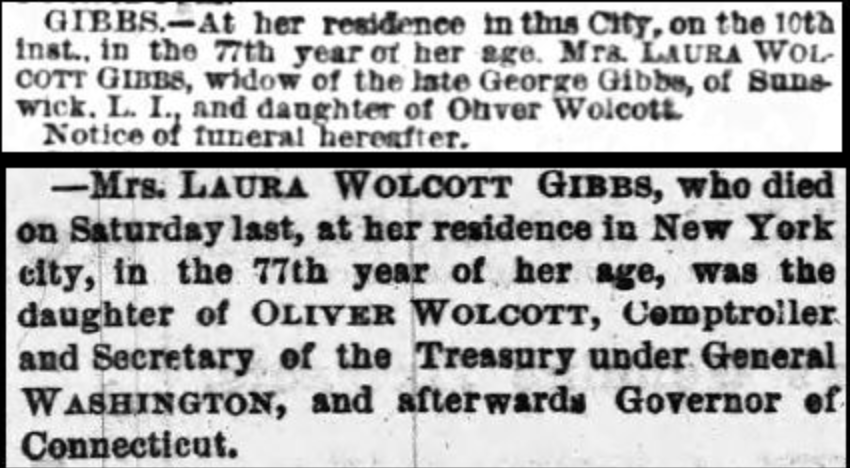 LAURA WOLCOTT GIBBS was a remarkable woman and one who extended a wide and beneficent influence during a long life. When Laura died in 1870, Dr. Henry W. Bellows, the great Unitarian clergyman these wrote of her:

“One of the last links binding the present with the early and heroic period of our national history has parted. The daughter of Oliver Wolcott, a member of the cabinet of Washington, will carry into her tomb a store of vivid recollections of the men and the times when our national life was young and earnest, anxious and devoted – after having given in her own person and life one of the best illustrations of the spirit and character of the fathers.

Her earliest years were too thoroughly steeped in the memories and traditions of the great struggle that made us a nation, to allow her character to escape the most shaping and permanent effects of it.

The ancestral home for three generations must have been the resort of all the chief friends of the country and the cause, and Oliver Wolcott’s daughter, the heiress of his vigorous intellect and decisive will, motherless from childhood, and taking her place in her early teens at the head of her father’s table, must from very infancy have been more accustomed to the discussion of public questions and the sight of public men than to the prattle or the playthings belonging to the nursery.

So fresh and active were these impressions that it was impossible to be in the company of Mrs. Gibbs for the shortest time without feeling that public questions, public interests, and duties were her natural or inherited concern. I always felt, in the presence of Mrs. Gibbs, as if I were talking with Oliver Wolcott himself and saw in her self-reliant, self-asserting and independent manner and speech, an unmistakable copy of a strong and thoroughly individual character, forged in the hottest fires of national struggle.

The intense individuality of her nature set her apart from others. You felt that she was a piece of the original granite on which the nation was built. It was very easy, from such a sample of the old stuff, to understand how the Revolution was accomplished.

Mrs. Gibbs brought down to our times in rare perfection these marks of our heroic age. She stood amid feeble, impressionable and plastic people, of which every society must be largely composed, like a rock that had been grooved and sculptured in some grander time. Nobody went to her for echoes of their own opinions or repetitions of the current notions of the day. But if you wanted to hear the truth plainly or even severely told,- if you wanted a strong independent judgment, – to feel the force of a vigorous nature, full of observation and reaction and common sense, brought to bear upon the matter in hand, where could you so certainly find it as in her presence?

Rectitude, veracity, simple, natural faith, and trust in great verities, with a noble skepticism for sentimental make-beliefs, self-reliance, with a fund of dry humor and sharp satire, marked her character. In the Civil War, she had the passionate patriotism of a young soldier. She lived in the news from day to day and stimulated all about her with ceaseless labors and services. It was not unusual for her to rebuke, even as she went along her outdoor visits to the butcher or the grocer, any expressions of an unpatriotic character that chanced to meet her ear. And thus she exercised, through her genuine earnestness of conviction, a positive political influence on the working class in her own neighborhood. They respected, after long acquaintance, her strength of judgment and reason, her uprightness and downright- ness, her simplicity of manners and courage of deportment and speech, and treated her like that almost extinct personage, the Lady of the Manor.

“It must not be inferred, from the emphasis laid upon the strong points in her character, that Mrs. Gibbs was deficient in tenderness and gentleness of heart. She had been a devoted and affectionate wife; she was a fond mother and warm friend. Those who knew her most intimately would probably insist that the largeness, depth, and self-sacrifice shown in her heart was her most striking grace and glory. To all, a certain magnanimity and grandeur of feeling must have been apparent. Constant and persistent in her friendships, painstaking and wise in her charities, she was an excellent woman, doing good as she had an opportunity, in an unostentatious and secret way. Few people, I heard one say who had the best opportunities of knowing, have made as good a use of a long life in the way of steady, quiet service to the poor and the sick and the unfortunate, or in the exercise ·of- sound and restraining counsel. It was not merely her strength of mind and her play of wit that drew so large a circle of friends about her, but her essential goodness of heart, reliableness of friendship, and the worth and weight of her sympathy.

“Widowed at an early period of her life, she brought up her family in such a way that her strong will neither hampered their independence nor weakened their union. It was delightful to see how rigorously she kept her house and home upon the footing on which her husband left it – a center for all her children, ever the resort of the best and most marked people, herself always the jealous head of the family; hospitable, able, and wise in her administration, and the object of a venerating and yet most companionable intercourse with her children. I rarely entered her doors without finding some interesting visitor there. She seemed to exercise to the last a powerful attraction for all superior spirits.

“I have thought it a duty to take this brief public view of the feelings aroused by the death of this strong woman, who represented so much of the past history of the country. I beg seriously to commend her example to the consideration of those who think the home and the family a small sphere for a woman to occupy. She proved how large, how decisive, and how excellent may be a woman’s sway who merely improves her domestic and social opportunities. She was one of the heirs of the great women who matched our Revolutionary sires, and who did their full part in achieving and consolidating our liberties, without once deserting the woman’s place, or imagining her sphere to be contracted. May her death add a fresh sense to the lesson her worthy and vigorous life inspired.”

It is necessary to make only a few additions to the admirable characterization of my grandmother made by Dr. Bellows. He has referred to her intense interest in the Civil War; tales of her special interest in the welfare of the sick and wounded might be cited from the recollections of members of the family. She was a strong abolitionist and used to hide negro slaves in her cellar at 261 Greene Street (renamed Winthrop Place). Even in New York City it was the custom to hunt down these refugees, and houses, where they were suspected of being concealed, were marked by a cross in chalk; Mrs. Gibbs, when she found such a mark would go down at night and remove it. Her love of beautiful objects and her own artistic gift should be enlarged upon. She drew with pencil and charcoal and also painted in watercolors extremely well. Partly from memory, partly from the study of other pictures, notably those of Trumbull, she executed in watercolor a portrait of Alexander Hamilton, which, having been engraved, remains one of the most generally admired portraits of Hamilton and widely used for the illustration of books. It represents him in early manhood, with an expression of much vigor and liveliness, in every way in his happiest moments. I do not know what became of the original, but the engraving from it is frequently met with and bears the name, «L. W. Gibbs, pinxit.”

The furniture and paintings of the house in Winthrop Place, where Mrs. Gibbs lived so long, made a collection as is rarely seen. Almost everything was an heirloom and recalled colonial times or the early days of the Republic. In the dining room was Cleven- ger’s bust of Oliver Wolcott, his portrait and that of his wife by Trumbull, and the portraits of Laura Wolcott by Stuart and of Elizabeth Wolcott Gracie by Trumbull. Also, there were four Gilbert Stuarts,- of George Gibbs (II.); his wife, Mary Channing; his partner Captain Anthony; and one of Colonel George Gibbs. In the drawing-room hung one of the two sets of Stuart portraits of the first five presidents of the United States. The drawing-room furniture was bought, at the time of Gibbs’s marriage, from Col. Humphrey, our first Minister to Spain, who disposed of much of his collection upon his return to America. This furniture, which is very beautiful, is Spanish Louis XVI; the set is now owned by Mrs. J. West Roosevelt. Among the many memorials of the Wolcott and Gibbs families, and of Washington and Hamilton, was Wolcott’s commission as Secretary of the Treasury, signed by Washington and Randolph, and a silver wine cooler given to him by Washington when he retired from the presidency. There was also a gold locket containing a lock of Washington’s hair. This was cut by Mrs. Washington and presented to Mrs. Wolcott, from whom it has descended to George Gibbs (V.). This interesting collection has been dispersed among the descendants of George and Laura Wolcott Gibbs.