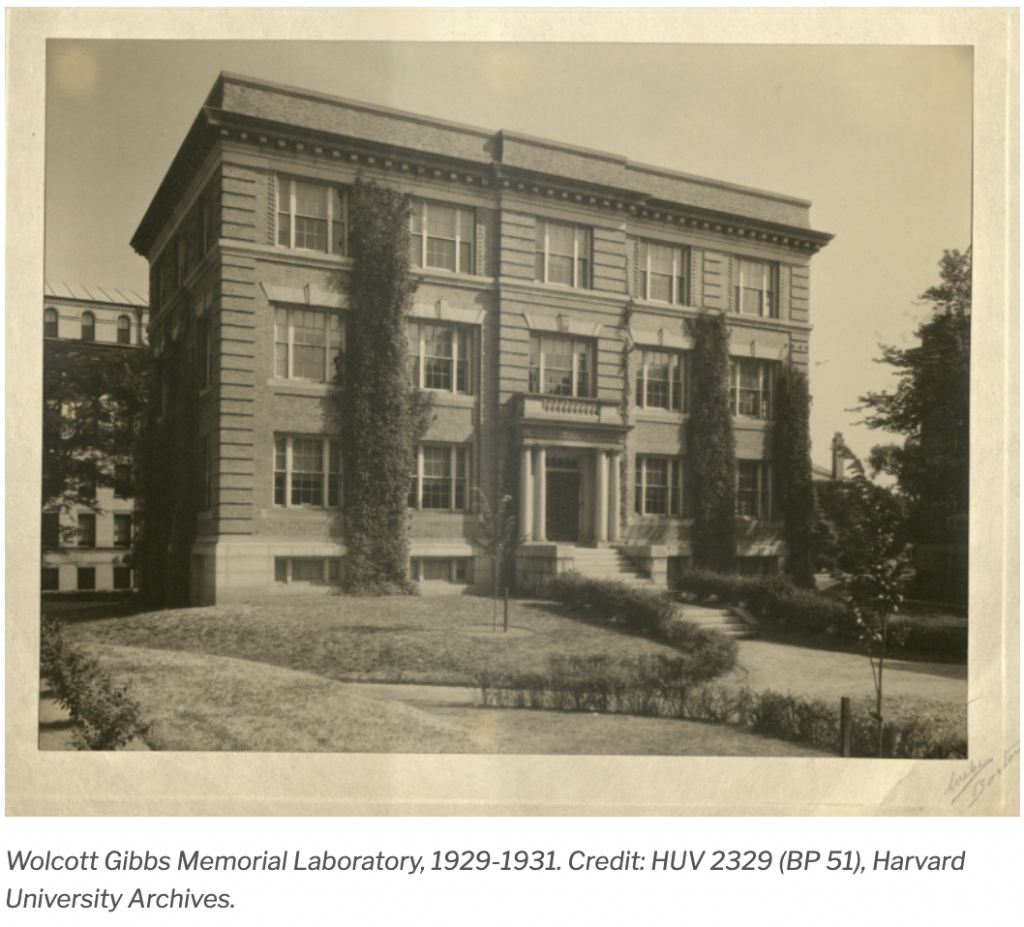 “THE MOST DISTINGUISHED SON”

OLIVER WOLCOTT GIBBS, best known as Wolcott Gibbs, fourth child and second son of George and Laura (Wolcott) Gibbs, was the most distinguished of their sons, and is spoken of in the “American Journal of Science” as “the most commanding figure in American Chemistry.” Many accounts of his life by men able to estimate his work are to be found published; certain of these are given in Chapter IX, and a bibliography of the many papers and press notices will also be there found. He graduated from Columbia, A.B. r 841, A.M. r 844, and from the College of Physicians and Surgeons in r845. Then he studied chemistry at the University of Berlin in the laboratories of Rose and Rammelsberg and subsequently spent five months with Liebig in Giessen, and attended courses of lectures on physics in the College of France in Paris. Returning to America he was a lecturer on chemistry at Delmore College, Newark, Delaware, 1848; professor of chemistry and physics at the New York Free Academy (afterward the College of the City of New York) ( 1849-63); Rumford professor and lecturer on the application of science to the useful arts, Harvard, 1863-87; and was made professor emeritus in 1887.

He was a member of the executive committee of the United States Sanitary Commission in New York during the Civil War and was a founder of the Century and Union League Clubs, New York City (see page 1 54). Dr. Gibbs was elected an honorary member of the American Chemical Society; the first American honorary member of the Royal Academy of Sciences of Berlin; a charter member of the National Academy of Sciences (American), and served as its foreign secretary, vice-president, and later as its president; vice-president of the American Association for the Advancement of Science in 1866, and president in 1896. In 1873 he was appointed United States Commissioner to the Vienna Exposition, which was held that year. He received the honorary degree of LL.D. from Columbia in 1873 and from Harvard in 1888. Shortly before his death, at a time when age prevent- ed his leaving home, he received the degree of LL.D. “in absentia” from the University of Pennsylvania. The list of the honors he had received is well covered in Dr. Richter’s paper (Chapter IX.). It should also be mentioned that on the: fine bronze doors of the new National Academy building at Washington his portrait will be found as representing the National leader in “Chemistry,” with the: figure of Rowland representing “Physics,” Dana “Geology” and Newcomb “Astronomy” in adjoining panels. His many contributions to the American Journal of Science, the American Chemical Journal, and the Proceedings of the Academy of Arts and Sciences include papers on various subjects, both chemistry, and physics.

He was for a number of years engaged in a remarkable series of researches on “Complex Inorganic Acids” ( I 877 to 1890) and was a pioneer in this: field. After his death, his old students, his friends, and his family raised a fund to build and endow the “Wolcott Gibbs Memorial Laboratory” at Harvard University. This: fine building was opened in January 1913.

I shall not further here enlarge upon Wolcott Gibbs’s career and attainments, as these are covered in the references to him to be found later, especially in the admirable paper by Dr. Richter, and the one by 1 Miss Powel. My attachment to my uncle was as close as that of a son to his father; he was my mentor throughout my mature life. I cannot here give an adequate estimate of this great man’s personal qualities; these and his professional work have been set forth elsewhere by his associates, but some indication of the extent of his scientific attainments may be drawn from them. I would wish, however, to mention the sweetness and unselfishness of his character, his modesty, and dislike of sham and self-advertising which were outstanding characteristics of the man; he especially scorned attaching his name to certifications or testimonials which had a commercialized object; for this reason, perhaps, his name was not widely known among laymen, who are influenced in their estimates of men by newspaper publicity.

Wolcott Gibbs, a charter member of the Academy as well as its president from 1895 to 1900, was a well-known American chemist. Gibbs graduated from Columbia University in 1841 and received his medical doctorate from the same institution in 1845. In 1848 Gibbs accepted a post at the City College of New York. He later served as the Rumford Professor at Harvard University between 1863 and 1887, at which point he retired to his private laboratory. Throughout his scientific and academic career, Gibbs was primarily an inorganic chemist who made contributions to the understanding of complex acids, gas analysis, and the structure of salts and platinum metals.

Wolcott Gibbs married in 1853, Josephine Mauran, who died in 1887, leaving no descendants. They adopted her nephew and niece – Cornelius Grinnell Betton and Elizabeth Lane Betton. Neil died in May, I 901.  “Phine,” was one of the most brilliant, talented, and fascinating women of her day. She was a passionate music lover and herself a beautiful singer and fine pianist. To the day of her death, when she had been almost blind for years, she could play the most difficult music from memory. It was part of the delightful daily routine at her house, both in Cambridge and at Newport, for her to accompany Neil Betton at the violin and also Sally Norton (daughter of Prof. Norton) when she was available. This lovely woman I regarded as a second mother during the many years when it was my good fortune to spend much time in her house.