Researcher’s Note: The following text is my interpretation of the primary source documents I have assembled to draw conclusions and piece together previously undocumented histories of General Gibbs. On this page, I am making a significant leap on the possibility of how Alfred Gibbs and Peggy Forshee Blair possibly met. I have no primary source to draw my conclusions; however, I am making my best SWAG (Scientific wild-ass Guess) on what makes sense. The truth may become apparent in the future, but this is my attempt to explain a possible connection. If you have more details on this union, don’t hesitate to contact me, and we can collaborate on updating this page. – Garland H. Green, Jr.

The tenth child and fifth daughter of 4 to John Geddes and Sarah Ann Eyre Heron Blair. (source Blairs of Richmond pp. 20) As it applies to this story, two individuals play an essential role in the union of Peggy and Alfred. The first is her brother William Blair. 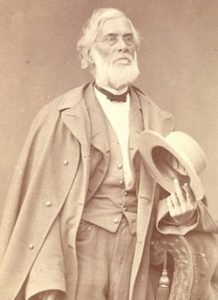 Graduated from the Military Academy in 1838. He was breveted captain on April 18, 1847, for gallantry at the Cerro Gordo, Mexico battle during the Mexican-American War. While possible that Alfred Gibbs and William Blair met at Cerro Gordo, given the size of the fight, they are unlikely to meet. William Blair again crossed paths with Gibbs at the Military Academy as an Assistant Professor of Mathematics from August 31, 1842, to August 31, 1843. There is a possibility that Alfred Gibbs would have met up with Blair while they were both at the US Military Academy at West Point. Still, any connection there would be one of distance since Gibbs would have been a cadet and not given to a friendship with a graduate and commissioned Army officer. What is most plausible is that in 1851 Blair was sent to San Antonio, Texas, where he was promoted to Captain, Staff — Commissary of Subsistence, September 27, 1850, and then sent to Corpus Christi, Texas from 1851‑53, where he reconnected Alfred Gibbs. The latter was on frontier duty, working as the aide-de-camp for General P.F. Smith at Corpus Christi Army Depot Department of Texas from 1852 to 1856. 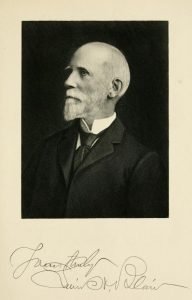 The person who documented a connection between Alfred and Peggy. Lewis Blair was born in Richmond, Virginia, on June 21, 1834, to John Geddes Blair and Sara Ann Eyre Heron Blair, the parents of Peggy and her brothers. During the Civil War, Blair fought with the Confederate States Army with the Company A, 13th Battalion Virginia Light Artillery. In his later writings, Blair would consider his time spent with the Confederate army a waste, as he considered slavery a “monstrous institution.” In the Southwest Historical Quarterly, Lewis Harvie Blair (the brother of Peggy Foushee Blair, the wife of Alfred Gibbs) penned his “Texas Travels, 1851-1855.” The article referenced in this research is one of a two-part research project that spanned over two summers as part of a grant from the American Philosophical Society (372 Johnson Fund) and the Agricultural and Mechanical College of Texas Fund for Organised Research. Taken from his research project Blair writes:

“The time for returning to Virginia having arrived, the only feasible way of getting back into the busy world sloop that plied between Corpus Christi and Indianola. Boarding the sloop we sailed through the bay, stirred to fury by the usual summer gale, and anchored for the night around the headland which we had always watched anxiously, on mail days, for the return of the sloop to bring tidings from home.” (Read Mails of the Westward Expansion 1803 to 1861)

“In the morning, we were greeted by a sea of glass, ruffled only by the momentary sight and snorts of numberless heads of great sea turtles, which appeared to be playing a game of hide and seek: a novel sight. The route was inland, i.e., in the smooth waters between the outer islands and the land. Our party (my brother William’s wife, my sister Peggy-afterwards the wife of Alfred Gibbs -and myself) reached the wharf where next morning we were to take steamship for New Orleans, and, while sleeping on the deck that night, I had somewhat the experience of the miller who was awakened by the stopping of his mill — I was awakened by the darkness caused by the total eclipse of the moon: my first experience with an event of that kind.”

That a relationship began between Alfred and Peggy. The two young people would have had time on the boat together to strike up a friendship and future marriage. Without knowing the exact dates, it is fair to say that Alfred was aged 32 and Peggy was approximately 24. The two would marry about two years later. L