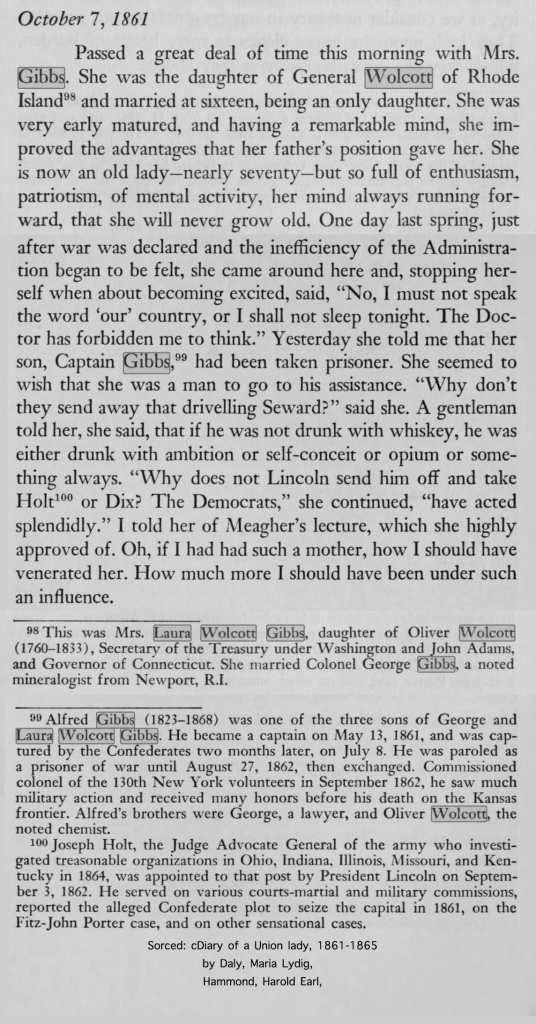 Passed a great deal of time this morning with Mrs. Gibbs. She was the daughter of General Wolcott of Rhode Island and married at sixteen, being an only daughter. She was very early mature and had a remarkable mind, she improved the advantages that her father’s position gave her. She is now an old lady, nearly seventy, but so full of enthusiasm, patriotism, of mental activity, her mind always running forward, that she will never grow old. One day last spring, just after the war was declared and the inefficiency of the Administra­tion began to be felt, she came around here and, stopping her­ self when about becoming excited, said, “No, I must not speak the word ‘our’ country, or I shall not sleep tonight. The Doc­tor has forbidden me to think.”

Yesterday she told me that her son, Captain Gibbs had been taken, prisoner. She seemed to wish that she was a man to go to his assistance. “Why don’t they send away that driveling Seward?” said she. A gentleman told her, she said, that if he was not drunk with whiskey, he was either drunk with ambition or self-conceit or opium or some­ thing always. “Why does not Lincoln send him off and take Holt or Dix? The Democrats, she continued, “have acted splendidly. “I told her of Meagher’s lecture, which she highly approved of. Oh, if I had had such a mother, how I should have venerated her. How much more I should have been under such an influence.

98 This was Mrs. Laura Wolcott Gibbs, daughter of Oliver Wolcott (1760–1833), Secretary of the Treasury under Washington and John Adams, and Governor of Connecticut. She married Colonel George Gibbs, a noted mineralogist from Newport, R.I.

99 Alfred Gibbs (1823-1868) was one of the three sons of George and Laura Wolcott Gibbs. He became a captain on May 13, 1861, and was captured by the Confederates two months later, on July 8. He was paroled as a prisoner of war until August 27, 1862, then exchanged. Commissioned Colonel of the 130th New York volunteers in September 1862, he saw much military action and received many honors before his death on the Kansas frontier. Alfred’s brothers were George, a lawyer, and Oliver Wolcott the noted chemist.

100 Joseph Holt, the Judge Advocate General of the Army who investi­gated treasonable organizations in Ohio, Indiana, Illinois, Missouri, and Ken­tucky in 1864, was appointed to that post by President Lincoln on September 3, 1862. He served on various courts-martial and military commissions, reported tl1e alleged Confederate plot to seize the capital in 1861, on the Fitz-John Porter case, and on other sensational cases.