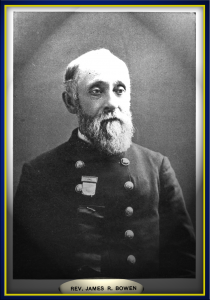 This preparation of this history has been carried forward with mingled feelings of pleasure and pain. I have been singularly taken back in my laborious search for historical material. I have lived over those three eventful years of our regimental service, like the successive presentation(of a moving panorama. Their scenes have vividly seemed to pass in review. With their forms and faces, the names of comrades, I recall them after more than a third of a century’s lapse in time. Yet I see them now as if yesterday. The battlefield, with its movements of troops, the roar of cannon and rattle of small arms, the ringing commands of officers, and the groans of the wounded and dying soldiers, are again living realities.

Looking back over thirty-eight checkered years, I behold a magnificent regiment, with total ranks of patriotic young men, taking their departure for the front. Three years later, a portion return as battle-scarred veterans, home with a missing limb or severe wounds, and all more or less injured, and life shortened by the exposures and hardships incident to army experience. Today we gaze upon the fragments that survive. We are but the rear guard, the main body having crossed the dark river and pitched their shining tents ” where glory guards with solemn rounds the bivouac of the dead.”

In this connection, a word as to why the history has been written so long after the ending of the war, will be in place. Aside from the excellent little pamphlet prepared by Lieut. J. N. Flint, at the close of the war, we have no record of our splendid service as a regiment, although nearly every survivor has felt the desire for a complete history. Several efforts in this direction have failed, although it is probable that had our

Some have asked why this book’s history has been written so long after the ending of the war? Except for the excellent little pamphlet prepared by Lieut. J. N. Flint, at the close of the war.

With this exception, we have no record of our splendid service as a regiment, although nearly every survivor has felt the desire for a complete history. Several efforts in this direction have failed, although it is probable that he would have succeeded had our beloved Major Smith been spared. Some of the materials he collected have been utilized in this volume. Excellent contributions from Lieutenant Flint and many others have been added.

At our memorable reunion in Buffalo, the author heard many expressions of regret that our history should go unwritten. But who should undertake the task? No one more competent seemed disposed of, so after an extended correspondence, receiving many assurances of assistance and best wishes for my success. Thus, I entered into this work knowing that it would require a degree of patience, perseverance, and hard labor. Still, I had no conception of the burdensome and challenging undertaking that waited before me.

Explanatory circulars were sent to comrades whose addresses were obtained, requesting that each contribute some items of interest for the history. In answer to these personal appeals, many valuable data came to hand·, gathered from carefully preserved army letters, newspaper correspondents, old army diaries, and personal recollections.

During our entire three-year service, it was my custom to write quite elaborate descriptions of our battles, raids, marches, and camp life for the gratification of friends at home or publication in-home newspapers. Fortunately, much of this material has been preserved and drawn upon in this work. These letters, written when all the facts were fresh, are more reliable than accounts written after the lapse of years. I have copied primarily from them in a few instances since they contained a more complete and authentic record of our transactions than elsewhere obtainable.

Various war histories contain descriptions of campaigns or battles in which our regiment was concerned. We have consulted these descriptions, consisting of forty large volumes of official records on the War of the Rebellion, and searched for official reports of interest in this history. Such official reports made by command­ing officers of both armies immediately after the battles or campaigns are considered more reliable than any other source of information.

It may differ from most war books in that it is comparatively free from dry statistics and mere details of military movements. On the contrary, the effort was to supply a missing part in soldier history by the introduction of suitable anecdotes, daring adventures, thrilling incidents, and descriptions of camp life, as well as the wreck, roar, and carnage of battle; all, how­ ever, drawn from experiences within our regiment.

War, though a grim reality, had its humor and its tragedy, and our history would be incomplete without an occa­sional presentation of the humorous side of army life.

No effort has been spared to place it in permanent form, in a reliable record of the regiment’s three-year service. We capture its heroic deeds, desperate battles, bold achievements, and undy­ing glory;’ such a record as every dragoon will appreciate, which will be prized by his family when the veteran has passed to the eternal camping grounds. It is also impartial. I give credit and honor to the gallant officers who led the brave boys and us in blue who composed the rank and file. None should overlook or underestimate the courageous men who stood behind the bayonets or wielded the gleaming saber in the carnage of battle. Courage amid whistling bullets and cannon’s roar pressed with an unfaltering tramp, tramp, into the very jaws of death, or in the thunderous cavalry charge, with waving sabers and savage yell, swept down upon the enemy like a besom of destruction.

As previously stated, this history was prepared under peculiar embarrassments and difficulties. The survivors scattered from the Atlantic to the Pacific. Besides sending out nearly two thousand printed circular letters, I have written by hand and mailed over two thousand three hundred letters and postal cards. In many instances, from ten to twenty letters have been written to secure reliable information regarding some single circumstance. Notwithstanding the care exercised, errors may have crept in.

Comrades, this book is sent out without hope of financial remuneration for the time and labor bestowed upon it. I do not even expect to get back the actual cash expenditures; therefore, please be mindful of its faults and failings.

Last but not least, am I indebted to my faithful wife., with­out whose sympathy and cooperation during the weary weeks and months, I should have given up in despair.

Go to the title page
Introduction