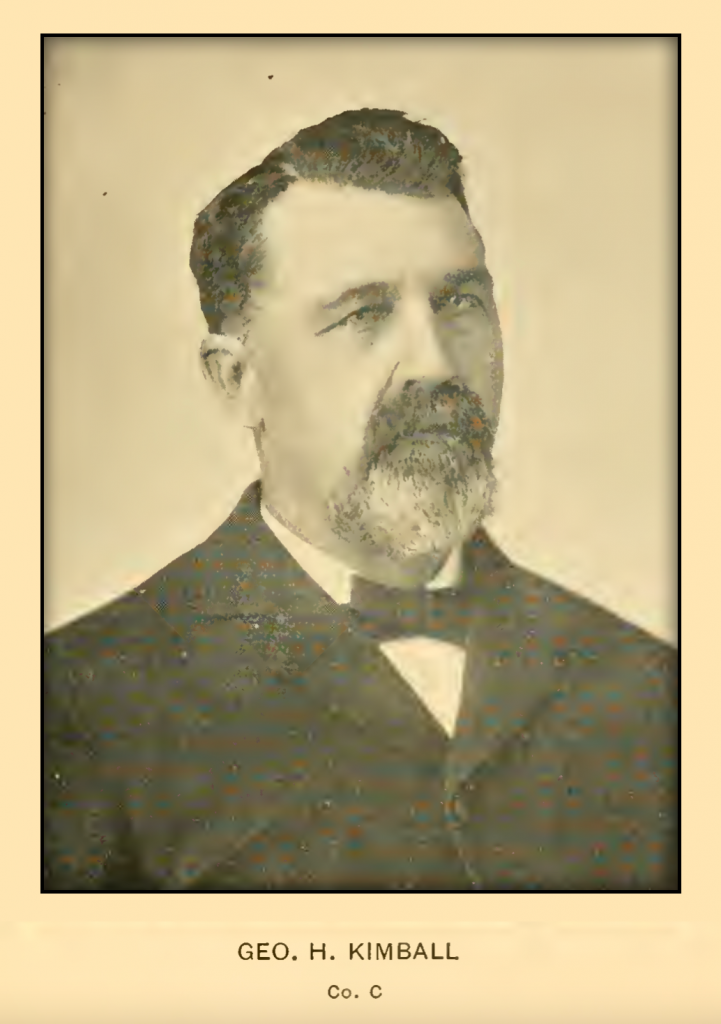 THE history of the First New York Dragoons is unique. In one respect, as an unbroken organization, it has served in two distinct branches of military service, one year in infantry and two in the cavalry. During the first year, we were known as the One Hundred and Thirtieth New York Volunteer Infantry and had abundant experi­ence as “doughboys”in fighting on foot and in long and exhausting marches with blistered feet”and ach­ing joints. As cavaliers, we also had our turn of pitying the poor boys who still had to ” hoof it.”We also learned that, though riding our prancing steeds, the mounted service was not all fun, especially under such vigorous leaders as Sheridan.

After our transfer to the cavalry branch of service, we became not simply ”mounted infantry,”but fu11-fledged cavalrymen, having changed not only our regimental name but exchanged everything pertaining to infantry,­ our Enfield rifles, together with all accouterments anti clothing, for the carbine, saber, and revolver, as well as fall cavalry uniform.

This explanation is made at the outset so that those un­acquainted with the facts may not get confused. So far. as the men were concerned, the One Hundred and Thir­tieth Infantry and the First Dragoons were the same.

The Regiment was organized at Portage, N. Y., in August 1862, our place of rendezvous being near the famous high bridge. It was recruited mainly from Liv­ingston, Allegany, and Wyoming Counties and composed of men who were unexcelled for intelligence, high moral character, patriotism, nobility of manhood, and genuine fighting quali­ ties by any regiment in the service. Although most were from well-to-do farm homes, almost every trade and profession were represented – the legal, medical, ministerial, and educational. There were engineers, machinists, carpenters, painters, jewelers, printers, and other skilled mechanics; editors, bankers, merchants, college graduates, professional musicians,

– all actuated by a stern sense of duty and one common purpose to serve their country in time of her greatest need.

At the president’s call for more men, the regi­ment sprang into existence as if by magic. It was mar­velous how quickly ten entire enlisted companies completed the organization.

Time and space forbid lingering long at Portage, but we can not forego a few reminiscences of our camp organi­zation. We all remember Col. W. S. Fullerton, with his antiquated uniform, who was active there but did not accompany the Regiment to the front for specific reasons.

We will never forget our thorough medical examination by Surgeon Kneeland; how he stripped, pounded, pinched, and pulled us, examining every limb and bone. Muscle and tooth tested our hearts and lungs, accepting only those he could pronounce “sound like a new silver dollar.”We were turned over to the govern­ment as sound, healthy men. Yet, after three years of active and faithful service, many of these noble fellows, exposed to hardships and the terrible strain of army life, returned home broken in health. But now, strange as it may seem, when an application is made for a pension, they must search from Dan to Beersheba for evi­dence to prove that they did not have a disability and were cripples at the time of their enlistment.

After our acceptance by the surgeon came the formal­ity of mustering into the service for three years, taking the oath of allegiance to the government in whose defense we were soon to fight.

Then came the lettering of companies and the distribu­tion of uniforms, the establishment of the camp guard, squad drill, and election of officers.

We do not forget the thousands of visitors who over­ whelmed us with good things to refresh the inner man, nor our evening campfires, where we listened to the yarns spun by the champion storytellers of the Regiment. We recall the romantic marriage of Lieutenant-Colo­nel Thorp, performed on the battalion line, backed up by the Regiment at “parade rest,”thus presenting us with one more “major”than the blue book provided. (Mrs. Thorp’s maiden name was Mandana Major.) At last, the eventful day (Sept. 6, 1862) came, with it the order to break camp and go to the front. With knapsacks in place, a thousand newly made soldiers were in line of march for the railway station at Portage Bridge. Not less than ten thousand visitors were present to witness our departure. Who, present upon that occa­sion, will ever forget the touching scene, when for a short time the Regiment broke ranks, that the boys might speak their last good-bye, or receive the parting embrace or kiss from fathers, mothers, wives, or sweethearts1

“Attention!” “All aboard!” rings out in stentorian tones from our young commander. The locomotive shrieks and the cars move out midst cheers from men and the waving of a thousand handkerchiefs from the sad-faced women who watched us as we passed out of sight.

The journey to Elmira was an ovation all the way. At that place, the Enfield rifles and other equipment were issued but not distributed until reaching Harrisburg.

Few of us will forget that night of torture as we moved out from Elmira, crowded into offensive-smelling cattle cars, seated with rough hemlock boards, without backs, affording us accommodations far removed from the luxurious Pullman and Wagner cars in which soldiers of today are carried.

Stiff and sore, we disembarked Sunday morning at Williamsport, Pa., just as the church bells called the people to worship. But the kind-hearted citizens were at the depot, loaded with baskets of provisions, and gave us a sumptuous repast.

Our patriotism was so highly extolled by these good people that we almost imagined the collapse of the Con­federacy must occur when it became known that the One Hundred and Thirtieth New York was headed South. But somehow, instead of throwing down their arms, the obstreperous rebs kept us dodging bullets for three long years.

After three rousing cheers for our kind-hearted hostility, we sped on to Harrisburg, where, under our new expe­riences, in the dirt of Camp Curtin, we made our first acquaintance with shelter, tents, and army “gray-backs.”

Here, too, we received our first scare, as wild rumors were afloat that Lee was moving in that direction, and some of the timider tremblingly awaited the enemy’s onset.

Monday evening, we were hustled aboard a train of dirty coal cars, our destination being Baltimore. We arrived at a begrimed and gloomy set, this being our second night of rough riding, giving us a foretaste of the rougher experiences awaiting us. Nearly all day, we lay in the hot streets of the city, where, not long before, famous Sixth Massachusetts had received their baptism of brickbats.

Public sentiment was divided; while some scowled and manifested extreme hatred, we found others intensely outspoken in their loyalty. Some who purchased and drank milk there became sick, believing that it had been purposely poisoned.

Proceeding to Washington, we stretched our tired bodies that night on the commons near the capitol. First, however, we were marched into the rough room called the ” Soldiers’ Rest,”where Army bread, boiled pork, and dirty-looking coffee in tin cups were spread before us. Just from homes of plenty, many of the boys turned away in disgust and ate nothing that night. However, less palatable food was devoured with avidity a year or two later.

Following us came another New York regiment, more fastidious than ours. They were marched to the same place for supper and, after noting the general appearance of things, bolted outright, declaring: “We are Uncle Sam’s soldiers, but not his hogs.”

Still fresh in our memory is our odoriferous camp at Washington, containing more bad smells to the square inch than any spot we ever saw, and no wonder, it being on the border of a dried-up goose pond.

Everything about Washington presented a military aspect. Regiments were moving here and there. Offi­cers in bright new uniforms, with their gaily dressed orderlies, were galloping along the streets, while in striking contrast, the shabby, bronzed veterans were seen just from the front, and the maimed, disabled soldiers were lounging in the shade of houses and trees. Everywhere we caught tl1e gleam of the bayonet and heard the roll of drums and unceasing rumble of army wagons. Dirt and filth were around visible.

Street fakirs and peddlers besieged us at every turn, offering every imaginable device for the convenience of soldiers. Vile women plied their vocation, and viler men offered their services to pilot the unsuspecting boys to dens of infamy.

Embarking on the transport “New York,”we left the Capitol City for Fort Monroe, making a pleasant trip down the historic Potomac. We recall the tolling of our bell as we passed Mt. Vernon and the tomb of the immor­tal Washington, our ride over the Chesapeake Bay, and our arrival at the famous fortress, the recent scene of so many stirring events. We were also permitted to enjoy a refreshing sea bath and a pleasant stroll about the fortifications.

Passing over Hampton Roads, we disembarked at Norfork, Va., a city recently recaptured from the enemy but still a stronghold of rank traitors. Here we caught whiffs of genuine secesh atmosphere and were forcibly reminded by both men and women’s arrogant and insulting demeanor that rebeldom had finally been reached. The women, in particular, were emphatic in the manifestation of supreme contempt for Yankee soldiers, and when in response to Colonel Thorp’s request, the Regiment lustily sang “John Brown,”their anger and disgust were un­ bounded.

One or two incidents described in a letter at the time will serve to illustrate their venom. A number of the Regiment were quietly awaiting orders when a bevy of ladies (1) approached for the apparent purpose of offering insults, as one of them, looking directly at the boys, in a loud voice remarked: –

“What a horrid lot of dirty creatures they are; noth­ ing but the dregs of society.”

“When we get washed up.”

“Yes, but that won’t make gentlemen of you,”she exclaimed. “Our Southern soldiers are all gentlemen.”To which our spokesman quickly retorted: “Perhaps they are; but, madam, if you are a sample, all Southern women are not ladies.”Her face flushed with rage and shouts drowned her attempt to scream out a reply of laughter.

Soon after this occurrence, a large, pompous man, who we learned had been a prominent city official. He was boasting in the presence of some of the One Hundred and Thirtieth about the superiority of Confederate soldiers over the Yankee hirelings, reiterating the stale, old assertion that: “one Southerner is as good as a dozen Yankees in a fight.”

He had scarcely got the words out of his mouth when a small, wiry young man of the Regiment stepped up to him and remarked:

“See here, Mister, are you a Southerner ?”

“Well, you old traitor, I’m a Yankee and not as big as you are, but if you don’t get out of here or take your words back, I’ll knock them down your belly.”

Without a word, the fellow turned instanter, and dis­appeared around a corner.

Taking the train, we reached Suffolk, some eighteen miles southwest, about dark, Saturday, Sept. 13, 1862, just a week after leaving Portage. This place is about fifty miles southeast of Petersburg and eight or ten miles from the North Carolina line. An offensive army was being collected to threaten the rebel capital from the South. This proved to be our army home for about nine months and our training school for the severe and trying ordeals we were to pass through later on.