Dr. John Blair Gibbs, who was killed while in active service at Guantanamo on June 11th, and was the first medical officer to loose his life in the present war, was a well-know and highly esteemed member of the profession in New York. He had attained an enviable position as a surgeon and pathologist, and gave up a large and lucrative practice to enter the service of his country. He cam of good old Revolutionary stock, and his father, Major Gibbs, of the Seventh United States Cavalry, who had served with gallantry through the Mexican and Civil wars, was killed with Custer at the battle of Little Big Horn. At the time of his death, he was a major-general by brevet.

Dr. Gibbs was born in Richmond, Va., thirty-nine years ago, and was graduated from Rutgers College, New Brunswick, N.J., in 1878. He pursued his medical studies first at the University of Virginia, and afterwards at the College of Physicians and Surgeons, New York, from which he was graduated in 1882. In 1884, after having served for eighteen months as interne at Bellevue Hospital, he went abroad and studied for nearly two years in London and Vienna. On his return to New York he became associated with Dr. Charles Kelly, with whom he remained until 1894, when he formed a partnership with Dr. Parer Sims. When ware with Spain was declared he immediately applied for a position in the naval medical service, to which his fondness for yachting inclined him rather than to the army. He was appointed acting assistant surgeon, United Staes Navy, with the rank of ensign, on May 3rd, and passed the requisite examination before the Board of Examiners at the Brooklyn Navy Yard with high honours.

At the time he volunteered, Dr. Gibbs was assistant attending surgeon at Roosevelt Hospital, and instructor at the Post-Graduate Medical School, and first assistant surgeon to the Lebanon Hospital in the Borough of the Bronx. AT the special meeting of the board of trustees of the latter institution, held 19th, resolutions lamenting his untimely death were adopted. 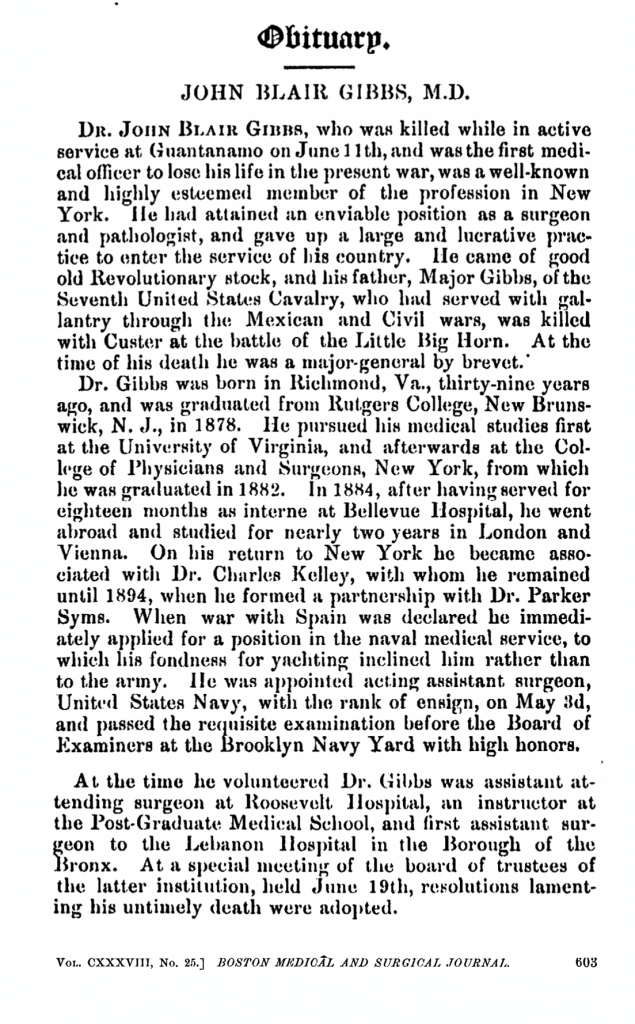